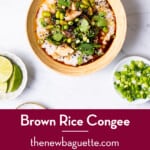 This vegan brown rice congee is topped with sauteed shiitake mushrooms, edamame, and spinach. Healthy and satisfying, but won’t weigh you down.

Congee – the creamy rice porridge consumed all across Asia – is a dish I was vaguely aware of for years but never ventured to explore on my own. That is, until I had to research the recipe for a freelance client. When I took the first bite of my first-ever congee, I truly couldn’t believe my mouth.

It was good. As in, I couldn’t stop saying, “Oh my god, it’s so good” the whole time I was eating. The porridge itself was creamy and light, while the toppings I layered on with abandon rounded it out with salty, savory, nutty flavors, as well contrasting textures. Bite after bite, it felt like a party in my mouth. (But, like, a very nourishing, calming party… like a slumber party, perhaps.)

I am so excited to share this whole-food plant-based version with you. It’s packed with hearty veg and a plethora of flavors, and will warm you from the inside out.

Congee refers to rice that’s simmered in a large volume of water until it completely breaks down into a thick, creamy, gelatinous porridge. It’s traditional in many Asian countries, including China, Korea, Japan, and Vietnam (where it’s also called jūk/jook, juk, kayu, and cháo, respectively).

Congee is often eaten for breakfast, or by those who are sick or hungover, since it’s easy to digest. It also has a history of being made in times of famine – to stretch a small amount of rice to feed many people.

What’s In This Version

This recipe consists of creamy brown rice congee – with the rice cooked in salted water alone. To complete the dish, shiitake mushrooms, edamame, and spinach are sauteed separately and seasoned with garlic, ginger, and soy sauce. Additional garnishes – scallions, cilantro, sesame oil, and sesame seeds – are key to rounding out the flavors and adding texture, since this dish is all about contrast.

How to Make This Recipe

The Porridge: To cook the rice itself, combine 1 cup of brown rice with 7 cups of water and salt in a medium pot. Bring to a boil, then simmer until the rice is completely broken down and the mixture is thick and creamy. Be sure to stir often to prevent the rice from sticking to the bottom. Brown rice congee takes about 1.5 hours; white rice takes about half as long.

The Vegetables: While the rice is simmering, saute diced onion, chopped shiitakes, and shelled edamame until they’re golden brown – about 8 minutes. Stir in fresh minced garlic and ginger, then incorporate the spinach by the handful, adding more as it wilts. Finally, season everything with a bit of soy sauce.

The Garnishes: I’ve said it already, but these additional toppings are key. An extra drizzle of soy sauce and sesame oil, plus toasted sesame seeds, a handful of chopped scallions and/or cilantro, and a bit of hot sauce (if you want) will round out this dish. A squeeze of lime and crumbled nori are also great ideas.

Yes, you can cook this in advance. Congee will keep in the fridge for up to 5 days – although it will thicken slightly. You can reheat it in the microwave or on the stove. The spinach mixture will keep well in the fridge, too. I love having this duo ready to go for breakfast, lunch, or dinner.

This vegan brown rice congee is topped with a mix of sauteed shiitake mushrooms, edamame, and spinach. Don’t forget the extra garnishes – they are key!