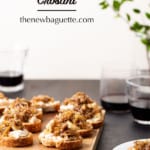 These vegan caramelized onion crostini are a sophisticated party snack everyone will adore!

If you were to ask me if I had a signature holiday dish, I would point you to these caramelized onion crostini without hesitation. They’ve been a part of every single one of my holiday meals since 2009 and I fully intend to continue the tradition for as long as there are onions to caramelize and baguettes to toast in this world.

2009 was the year of my first Friendsgiving and there is dated, photographic evidence of the event. (Although, I’ll spare you the pixelated glory from my point-and-shoot days.) My friends and I were in our first year of college and I hosted the party at my parents’ apartment (duh).

I’d prepared the works: turkey, stuffing, potatoes, gravy. The caramelized onion crostini were the wildcard, likely inspired by something I’d seen on the Food Network. To everyone’s astonishment – including my own – they were the most popular thing on the table. No one could fathom that humble ol’ onions could turn into such sweet-savory magic.

In the past 11 years, the crostini have undergone several evolutions. First, I’ve swapped out the original goat cheese for my beloved plant-based spreadable “cheese”: cashew ricotta. Second, I upgraded the caramelized onions with a splash of balsamic vinegar, whose fruity tang balances the onions’ earthy sweetness. Here’s how it’s done!

Start the Cashew Ricotta: First, soak the raw cashews. This step softens the nuts and helps them blend up into rich, creamy goodness. Measure out the nuts, cover them with boiling water, and set aside for at least 30 minutes (or up to several hours).

Caramelize the Onions: Meanwhile, thinly slice the onions and place in a large non-stick skillet with some oil, thyme, salt, and pepper. Cover tightly with a lid (you wanna trap that steam!) and cook until they’ve released some of their juice, about 5 minutes.

Then uncover and cook over a very tiny flame for a very long time – about 1 hour. Don’t forget to stir frequently. If at any point the onions start to look dry, add a tablespoon or 2 or water. The onions are done when they’re dark caramel-colored and pasty. Stir in the balsamic at the very end.

Make the Crostini: Next, cut a baguette into thin slices, drizzle lightly with oil, and bake until golden around the edges – 8 to 10 minutes.

Finish the Ricotta: Drain and transfer the cashews to a food processor, along with miso, lemon juice, garlic, salt, and water. Puree until the mixture resembles ricotta cheese and has a rich mouthfeel.

Assemble: When ready to serve, divide the ricotta among the toasts and top with a heap of caramelized onions.

Properly caramelized onions have an intense, sweet-savory flavor, pasty texture, and dark caramel color. This is achieved by coaxing out and reducing the onions’ moisture and gently (very gently!) browning them. The process takes about an hour and anyone who says you can do it faster is lying. (Magic requires patience, friends!)

There are two steps involved. First, you cook sliced onions in a skillet covered with a lid. This traps the onions’ moisture inside the skillet and allows them to soften. Second, you uncover the skillet and gently brown the onions over a very low flame.

You do not want the onions to get crispy. You want a slow softening process and a gradual transformation from white to caramel-colored. If you notice the onions browning too fast, lower the heat. If they’re drying out, add a tablespoon of water.

How to Prep Caramelized Onion Crostini In Advance

All three components (toasts, cashew ricotta, caramelized onions) can be made in advance. The toasts can be baked, cooled completely, and kept in an airtight container at room temp for up to 2 days; the ricotta and onions can live in the fridge for up to 4 days.

Party Tip: I usually prep all three elements on the morning of the party. That way, when guests arrive early (or rather, when my cooking inevitably runs late) and ask if they can help in the kitchen, I direct them to crostini assembly while they sip on their first drinks.

For the Cashew Ricotta (see note below for substitutions)

If you don’t feel like making this “ricotta”, use a store-bought vegan cheese spread instead. If you eat dairy, feel free to sub with goat cheese or Boursin.