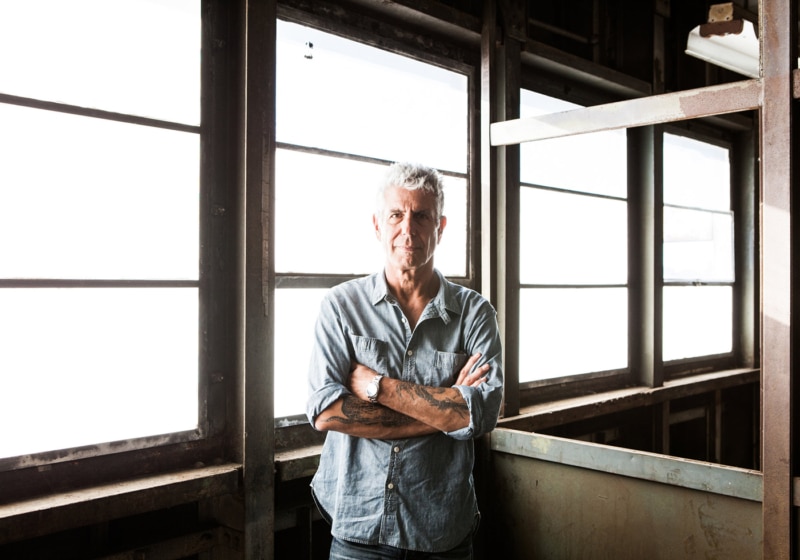 When I was in college and people would ask me what my dream job would be, I’d always say “Anthony Bourdain’s.” This morning, my heart is absolutely broken at the news of his passing.

I devoured his books and watched him with awe on TV, marveling at the stories, his passion, his humor, and his unrelenting insight. I love that he appeared just as comfortable wearing a tuxedo at the world’s fanciest restaurants as he was on a family farm in the mountains of Central Asia, witnessing a sheep slaughter.

I loved watching him observe. Although many people would be quick to dismiss him as crude or smug, if you watched him closely, you could always see the wheels turning in his head as he was learning, processing.

Yes, he showed us how to appreciate food, but even more than that, he taught us what the act of eating signifies. He taught us the importance of breaking bread with friends and strangers and showed us that – even more than architecture, books, or paintings – our food rituals are the ultimate window into our communities and ourselves.

He taught us that travel isn’t about visiting museums or monuments – it’s about experiencing how people different from you live their lives, learning their struggles and triumphs, connecting with them and ultimately realizing they are actually not that different from you at all.

He taught us that food doesn’t have to be expensive, overwrought, or served on a shiny platter to be celebrated – that 90-year-old grandmothers’ home cooking is just as, if not even more special. More importantly, he helped us see that there’s more to fine cuisine than traditional western European cooking.

Briefly meeting my idol in 2011 at the Union Square Barnes and Noble
during a signing of his book, Medium Raw.

When I first started writing about food nine years ago, it was Anthony Bourdain’s voice in my head that helped me overcome the fear of putting my passion out there in the world. Ever since I was a small child, watching my mom cook and host dinner parties for dozens of her closest friends, I understood what she was doing was very, very special, even though I couldn’t articulate why. And when I grew up and had to decide what to do with my life, although people around me did their best to offer practical career advice, it was seeing Anthony Bourdain on TV that gave me a glimmer of hope that maybe what I really want to do isn’t that crazy.

I don’t think I ever realized how much he meant to me until this day.

It’s true that the most genius people around us are often the most troubled. It’s almost as if this special brilliance – a heightened sensitivity to the world, perhaps – can be too much for the human brain to handle.

What hurts the most is knowing that this person who was so important to so many of us was hurting, and there’s no way we could’ve known and nothing we could’ve done. What’s more is the sadness of knowing how much more he had to teach us all. Wherever he is now, I hope that on some level he knows how much he was loved, how many lives he changed, and that through everything he contributed to the world, his spirit will continue to live on.