Last week, I did something big – something I’d always wondered about doing, hoped to do, yet was afraid of doing. If you follow me on social media, you may know that I’m talking about teaching a class! A few months ago at work, I was asked if I’d like to teach an intro class on food styling and photography, since we’ve never offered anything like it at NGI before. Although I in no way think myself an expert on either specialty, an intro class, I knew I could teach. Of course I said “Yes!”, and began crafting a class description so we could open the class for registration. Much to my surprise, the class sold out in days (with a waitlist to boot), before my presentation was even written.

Piece by piece, the presentation came together, and my best friend Sofya offered to practice it with me. I came over the weekend before the class and gave her an abridged presentation, at which point I realized what I signed up for was no easy task. “Holy sh*t – I’ve never taught before. I have no idea what I’m doing!” I thought and began to panic. As the class day drew closer the panic intensified, and by the night before the class, I could barely sleep. I woke up at 5am to practice the presentation once more before heading out to work. By 6:30 that afternoon, the classroom was full and everyone’s attention was on me. At 6:31, I took a deep breath, exhaled, and started my presentation. By what can only be described as a miracle, I actually did a good job. I didn’t stutter, throw up or pass out – all three of which I desperately feared. On the contrary, I spoke with confidence, the students were engaged, and I even got some laughs! Three hours later, I was relieved, happy, and gave myself a proverbial pat on the back. 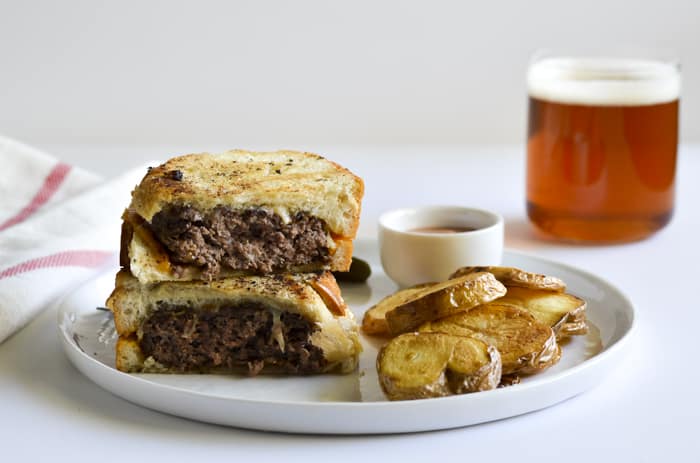 This recipe is meant to be a symbol of celebration – a marking of a special event with something indulgent – and for me, there is nothing more celebratory than juicy meat and melty cheese on white bread. Chocolate cakes be damned! 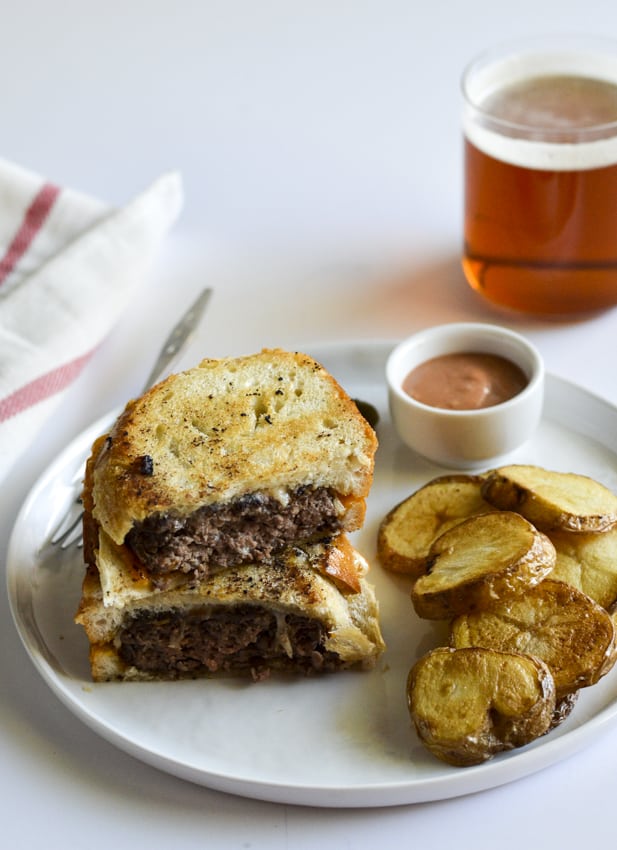 This particular patty melt is inspired by my favorite après-work destination in my ‘hood, The Rookery. After heavy-lift weeks, Rene and I head there on Fridays for drinks and patty melts. Reading this blog you probably realize I’m not a big meat eater, but after a streak of difficult days, all I crave is a big hunk of juicy red meat. It must be some sort of primal instinct, the idea that I deserve to indulge in meat and alcohol after a long week of hunting and gathering (aka office work in exchange for a direct deposit). 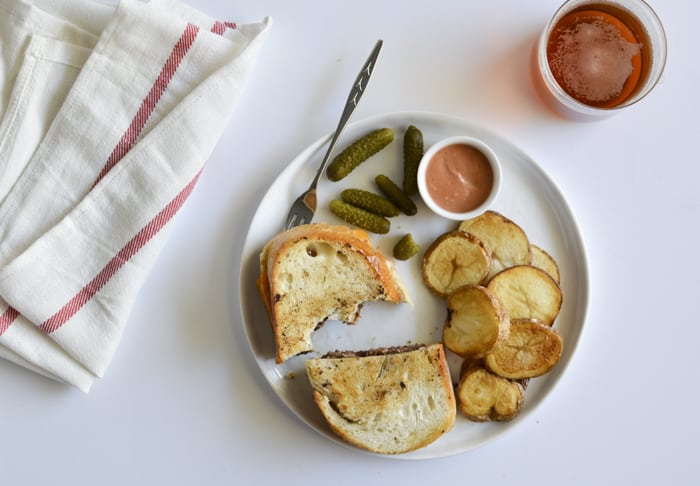 The Rookery’s patty melt is unlike any other: it’s not greasy, and does not come topped with caramelized onions. Instead, it is a large round of meat (more like a burger) wedged between two slices of thick airy bread. It comes with chips – fried, thick-sliced potatoes – and brown sauce (HP sauce), since the bar’s staff is of British descent. To replicate this beloved sandwich, I decided to forgo caramelized onions in my recipe, too. Most patty melt recipes will tell you to swipe a bit of mayo on the outside of the sandwich before frying it, but I opted to cook mine right in that glorious beef grease.

For the patty melts

For the chips and special sauce

What is your go-to “pat-myself-on-the-back” food?

Last week, I asked you guys to submit your questio

*Some #tbt scenes from our Roman holiday two years

There are a handful of dishes I think of as “veg

New video alert 🥳 For years I’ve been going b

Question: Why - in a land where sandwich menus reg