Looking for creative vegan Thanksgiving ideas? Scroll on for my most festive plant-based recipes, from appetizers and sides, to main dishes.

Thanksgiving is – and I suspect forever will be – my favorite holiday. When I first started cooking for Thanksgiving (or in my case, Friendsgiving), I began with all the classics I’d seen Rachael, Giada and Ina offer on the Food Network: turkey, gravy, potatoes, stuffing.

But when I started to transition to a whole-food plant-based lifestyle, I knew some changes would have to be made. The goat cheese on my crostini made way for cashew ricotta, the turkey drippings in my gravy became mushrooms, and so on.

Lest it sound like I was giving something up, my Thanksgivings actually became even more abundant. And putting together my annual menu – devoid of any meat or dairy – became my favorite creative challenge of the whole year.

If you’re gearing up for your first “wfpb” holiday dinner – or heading to a potluck – you may be wondering what vegans eat for Thanksgiving. The answer: the same things they eat year-round! (Some permutation of grains + beans + vegetables + nuts/seeds, basically). Below, I’ve rounded up my go-to vegan Thanksgiving ideas, including mains, starchy sides, vegetables, salads, and of course, my beloved mushroom gravy. 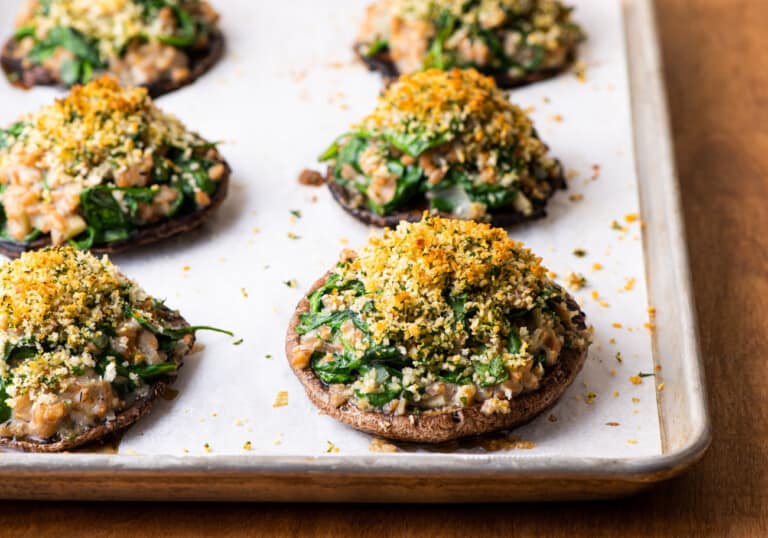 Basically an XL version of the classic appetizer.

A plant-based version the Italian-American favorite.

Comes with its own built-in gravy.

Beef makes way for mushrooms in this French bistro classic.

A can’t-miss treat for allium lovers!

A riff on the French classic featuring roasted veg in place of pork.

A light and easy 30-minute recipe.

Layers of fluffy potato slices in a rich cashew béchamel.

My quest to make the best brunch potatoes led me to this genius French technique.

An easy alternative to mashed potatoes.

A recipe I developed for The Kitchn.

The Ultimate Holiday Snack Board

Everybody’s favorite thing at every party I’ve ever cooked for. Period.

A 5-minute dip made with pantry staples.