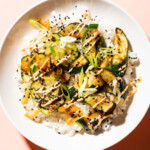 Every summer during peak zucchini season (i.e. when the farmers markets are anchored by seemingly bottomless crates of the green stuff), us recipe developers get busy. The goal: figure out yet another “best way to use up zucchini” recipe, so that you, dear home cooks of the world, won’t be left scratching your heads for too long.

Poke (pronounced poh-kay, rhymes with okay) is a traditional Hawaiian meal of cubed and marinated raw fish. This is most often tuna with soy sauce, sesame oil, and scallions. I haven’t been to Hawaii, but from my understanding, poke is a casual thing, available at grocery stores and gas stations.

Within the past decade, poke bowls have become super popular here on the mainland. Rice is often used as a base for the marinated fish, followed by a bunch of other toppings, like seaweed salad, avocado, cucumbers, sesame seeds, various sauces/dressings, fried shallots, you name it.

For me, a poke bowl is all about contrast. Contrast of textures – chewy fish, fluffy rice, crunchy vegetables; of temperatures – warm rice/cold toppings; and of flavors – sweet rice, briny fish, salty soy sauce, nutty sesame. With each bite, you get a little bit of everything. For this vegan poke bowl, I’m using sautéed zucchini instead of fish.

How to Make This Vegan Poke Bowl

Rice: Start by cooking the rice in boiling water. Do not stir while it’s cooking; after all the water is absorbed, turn the heat off, and let it stand covered (without stirring) for an extra 10 minutes to steam. This is how you get the fluffiest rice.

Zucchini: Meanwhile, slice up your zucchini and sauté for 8 to 10 minutes, until it’s nicely browned. Cook it over medium/medium-high heat and don’t overcrowd the skillet; resist the urge to stir the zucchini too often and wait until the very end to salt it. This technique yields golden brown, not-mushy zucchini with bright green skin.

Cucumber-Kimchi Salad: While the rice and zucchini are cooking, make the salad by combining cucumbers, kimchi, soy sauce, sesame oil, and sesame seeds. The longer this salad sits, the softer the cucumbers become and the more kimchi flavor they take on (this is a good thing).

Spicy Mayo: Finally, stir some Sriracha (or another hot sauce) into some mayo until it reaches your desired spice level.

If you try this recipe, let me know how it turns out! Give it a rating below and leave a comment, and don’t forget to tag your creation with #TheNewBaguette and @thenewbaguette on Instagram.

How you cook the zucchini is key to the success of this dish. Cook it over medium/medium-high heat and don’t overcrowd the skillet; resist the urge to stir the zucchini too often and wait until the very end to add any salt. This technique yields golden brown, not-mushy zucchini with bright green skin.