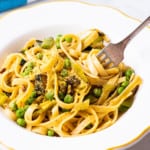 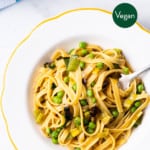 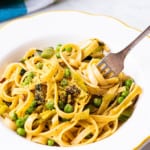 This lemony pasta with leeks and peas is a light, one-pan springtime meal. Comes together in just 30 minutes!

For internal purposes only, I refer to this dish as “quarantine pasta”. A year ago, when we were all shut up in our homes – somewhat clueless and fully terrified – many of us (Rene and I included) turned to doughy things and other starchy foods for comfort and solace. And I’m not a psychologist or anything, but this intensive therapy definitely worked. (Well, for the short term, anyway.)

This pasta with leeks and peas unintentionally became our signature lockdown dinner. I turned to this soul-satisfying one-pan meal – which was initially just a weeknight improvisation – whenever preparing three meals a day got to be too much (yes, even for a recipe blogger).

The dish calls for just a handful of ingredients, is decidedly unfussy, and is fun to eat in large quantities when you’re watching hours and hours of Netflix every night to escape the uncertainty of your own miserable life.

I’d considered sharing the recipe back then, but honestly thought it was too simplistic and not enough of a “recipe”. But when spring rolled around this year, I made the dish again and realized just how wrong I was. (My quarantine brain must not have been thinking straight…)

How to Make This Pasta with Leeks

This one-pan dinner comes together in the time it takes to cook a box of pasta. While you wait for a pot of water to boil, you slice up a leek and cook it in plenty of olive oil; the white parts get all soft and creamy, while the green parts get brown and crispy.

Eventually, the cooked leeks are joined by frozen peas, lemon zest, nutritional yeast, pasta, and some of the starchy pasta water. The result is a light springtime pasta coated in savory leeks, sweet peas, and spicy black pepper, with a lemony note in the background. Nutritional yeast adds a “cheesy” vibe and the pasta water binds everything into a silky mess.

Cleaning and Cooking with Leeks

If leeks are new to you, don’t stress. They’re basically a large onion-scallion hybrid with a grassy floral taste and crunchy texture. Just like onions, you can eat them cooked or raw, and I eat both the green and white parts.

One thing you’ll notice about leeks is how much sand they house between their layers. To clean the leek for this recipe:

Like most minimally-sauced pastas, this one is best when eaten immediately. Unlike something like lasagna, it doesn’t hold up too well to reheating.

Check out these other pasta recipes…

This lemony pasta with leeks and peas is a light springtime meal. Comes together in just 30 minutes!