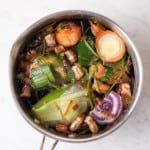 This month on TNB, we’re going Back to Basics! All month long, I’m sharing recipes and techniques for how to make pantry staples healthier and from scratch. Read on to learn how to save money and reduce food waste by making broth from veggie scraps.

During quarantine, I posted a tutorial on Instagram for how to make vegetable broth from scraps. In social media speak, it got “a ton of engagement” – aka, lots of people expressed their excitement to try the savvy technique. And although I wish I could take credit for its discovery, I’m just here to further spread the gospel…

The idea of vegetable scrap broth is to save various veggie peels and ends and freeze them until you have enough to make broth. Then you simply simmer those scraps in water, strain them out, and bam: vegetable broth.

The point of using scraps versus complete, unadulterated vegetables is to save full veg for scenarios where you’ll actually eat them – versus boiling the heck out of them and then just tossing them in the trash.

Whenever I’m preparing a veg-heavy dish (like soup), I keep an empty quart container near my cutting board so if I have some scraps that fit the bill, I can set them aside right then and there.

There are so many benefits to adopting this technique in your kitchen. The first is that it saves you money. Broth is mostly water, so when you buy it at the store, you’re mostly paying for the packaging.

The second is that it reduces food waste by repurposing scraps that you would otherwise throw away. It also reduces waste waste by keeping excess cartons out of landfills and oceans.

Lastly, homemade stock is healthier, too, since it has less sodium and you get to control the quality of vegetables you use. (A lot of store-bought broths are made from vegetable concentrates and contain preservatives.)

What Veggies to Use/Not Use

Not all vegetables are created equal as far as scrap broth is concerned.

Use ones whose flavor you’d typically want expressed in a broth, like onion skins (yes, even the papery bits!), carrot peels, and celery tops. Some less intuitive items include sweet potato ends, parsnips, leek greens, mushroom stems, fennel tops, and herb stems like those from parsley and cilantro. Beet ends may also work, just be mindful that your broth may take on a purplish tint.

Avoid cruciferous veg, like broccoli, cauliflower, and kale stems, which can give broth a sulfuric taste. Potato peels should be avoided, too, as they will make your broth cloudy.

The only extra thing I personally add is salt, which helps to draw flavor out of the veg scraps. You can also dabble with additional flavors like whole garlic cloves, bay leaves, peppercorns, and thyme sprigs.

This vegetable scrap broth is ideal for soups, stews, and risotto. Cooking lentils and whole grains in broth instead of water is also a great way to infuse them with flavor.

Making vegetable broth from scraps is a great way to reduce food waste, save money, and keep excess cartons out of landfills. Plus, it’s incredibly easy!

There’s no need to defrost the broth before adding to soup.

Get my Plant-Based Weeknight Dinners e-book for free!