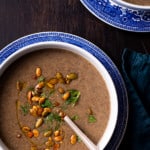 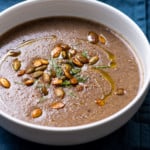 This vegan creamy mushroom soup is made with oats instead of dairy and flour.

In case you haven’t noticed, I kinda have a thing for mushrooms. It’s literally a struggle for me not to include them in every single dish because I really could eat them in every meal. (Just did a quick count: they’re in 5 of my 10 latest recipes…oops.) I just love their meaty texture, umami taste, and the depth of flavor they bring to plant-based meals.

That’s why this vegan creamy mushroom soup – which calls for an unapologetically large heap of ‘shrooms – is basically my ideal soup. Fellow mushroom lovers, rejoice!

This super simple, 5-ingredient dish is low in effort and big on flavor. It showcases a brilliant cooking technique – once again, something I picked up at Natural Gourmet Institute – of using rolled oats to make a creamy vegan soup with zero dairy/coconut milk.

No, that’s not a typo. This creamy soup really uses oats instead of cream. While the oats simmer in the broth, they absorb moisture while also releasing starch. Then when you blend the soup, you get a creamy, velvety texture that’s reminiscent of cream of mushroom soup. Only vegan, flourless, and better for you!

Another highlight is the soy sauce. Just a tablespoon’s worth rounds out the flavor of the soup and makes the mushrooms really mushroom-y.

How to Blend the Soup

I recommend using an immersion blender to puree this vegan creamy mushroom soup. It’s a must-have for soup-lovers because it’s…

If you don’t have an immersion blender, you can use an upright blender. You just have to be more careful.

When using a standard blender to puree anything hot, it’s super important that steam has a way to escape. Remember to take out the removable center of the blender lid before blending. If the steam is trapped inside, the top will blow off and the soup will go everywhere, staining your kitchen and potentially causing skin burns. (This happened to me when I was a teenager, hence why I haven’t made marinara since).

A dairy-free creamy mushroom soup made with oats instead of dairy and flour! (Adapted from The Complete Vegan Cookbook)

When using a standard upright blender to puree something hot, it’s important that steam has a way to escape. Remember to take out the removable center of the blender lid before blending, and cover the opening lightly with a kitchen towel while blending. If the steam is trapped inside, the top will blow off and the soup will go everywhere, staining your kitchen and potentially causing skin burns.