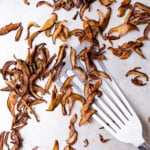 Shiitake bacon works best as a garnish, on basically anything that could use an extra hit of savoriness, be it avocado toast, scrambled tofu, or a creamy soup.

I often credit my former job at the Natural Gourmet Institute as one of the best things that has ever happened to me. My experiences there shaped me as a cook, as a professional, and as a person, really.

Thanks to NGI, I met some of my favorite people (many of whom are still close friends or collaborators to this day). And, not to mention, it set the stage for the career I have now. But perhaps most importantly: it gave me cashew ricotta, and it gave me shiitake bacon.

NGI – whose curriculum is now taught at the Institute of Culinary Education – taught the world how to turn humble plants into insanely delicious high-end food, waaay before vegan food was cool. Shiitake “bacon” is one of their hallmark techniques.

This technique is now widely used by plant-based cooks everywhere, so I can’t say with 100% certainty that NGI invented it. But, it is where I learned about it, which is why I’m giving them full credit.

This may look like a LOT of mushrooms, but they’ll shrink significantly in the oven.

What is Shiitake Bacon?

Shiitake bacon is a plant-based bacon alternative that’s ridiculously simple to make. All you do is thinly slice shiitake mushroom caps, toss them with a bit of oil and salt, and roast until they’re deeply brown. The mushrooms crisp up as they cool. The result? Smoky, meaty, umami-rich, crunchy-chewy bacon-y mushroom bits.

A Few Notes on the Technique…

The first thing to do to ensure shiitake bacon success is not wash your mushrooms under the tap. Mushrooms absorb water like sponges, and wet mushrooms will never get crispy. Unless your mushrooms are literally covered in soil, wipe them with a damp paper towel instead.

The second thing is to slice the mushrooms properly. You want them to be thin, but not paper thin. If they are too thin, they may stick to the baking sheet and fall apart; they’ll also lack that “meaty” texture. But if they’re too thick, they won’t get as crisp.

How to Use Shiitake Bacon

Shiitake bacon works best as a garnish, on basically anything that could use an extra hit of savoriness, be it avocado toast, scrambled tofu, creamy soup, creamy pasta, or caesar salad.

If you’re looking for a meatier, chewier alt bacon – like for a vegan BLT – make tempeh bacon instead.

Note: like regular bacon, this too will lose its crispy texture once stored in the fridge (but it’ll still be very savory and delicious!). Store leftover shiitake bacon in a paper towel-lined container in the fridge. Keep it on hand and sprinkle on anything and everything!

Shiitake bacon works best as a garnish, on basically anything that could use an extra hit of savoriness, be it avocado toast, scrambled tofu, or a creamy soup.